The River Ayr Race is a small 40 mile mostly off road ultra from Glenbuck Loch to Dam Park Stadium in Ayr.  It attempts to follow the river Ayr from source to sea and claims to be the only Scottish ultra to do this.  I’d entered this race last year but after (yet another) bout of injury I’d had to pull out and considered doing the same this year given the summer of injury I’ve had this year!!  Is it just summer I am injured?  I must look back my training logs.

This race was always going to be a hard training run for me, I’d decided before the race that I needed to control pace and effort in an attempt to get my longest run since the ACP 100km under my belt.  With the next 100k at the end of November, I needed to get these long runs in and this race fitted perfectly with my training plan.

Nutrition, was as always, Tailwind #gotailwind, and I also had some flat coke for the last push.  As usual it worked out pretty well, I also had a couple of emergency gels that I actually just binned.  I don’t know why I continue to bother with gels.  Probably the convenience of having them, but I just don’t need any solid foods on these races.  Tailwind did the trick and I took on some extra sugar in the form of the coca cola in the last 5 miles and that was it.

Shoes:  I was trying out a newish pair of Adidas Boost Ravens.  They came with those silly lock laces and they were cut off straight away, but I struggled to find sports laces that would fit them.  I eventually opted for a pair of black ‘business shoes’ laces.  They were thin enough to fit through the rigid plastic eyelets of the shoes.  All in all, great shoes, but I am losing a toenail and my feet were pretty sore afterwards, so the long distance off road shoe discovery continues. 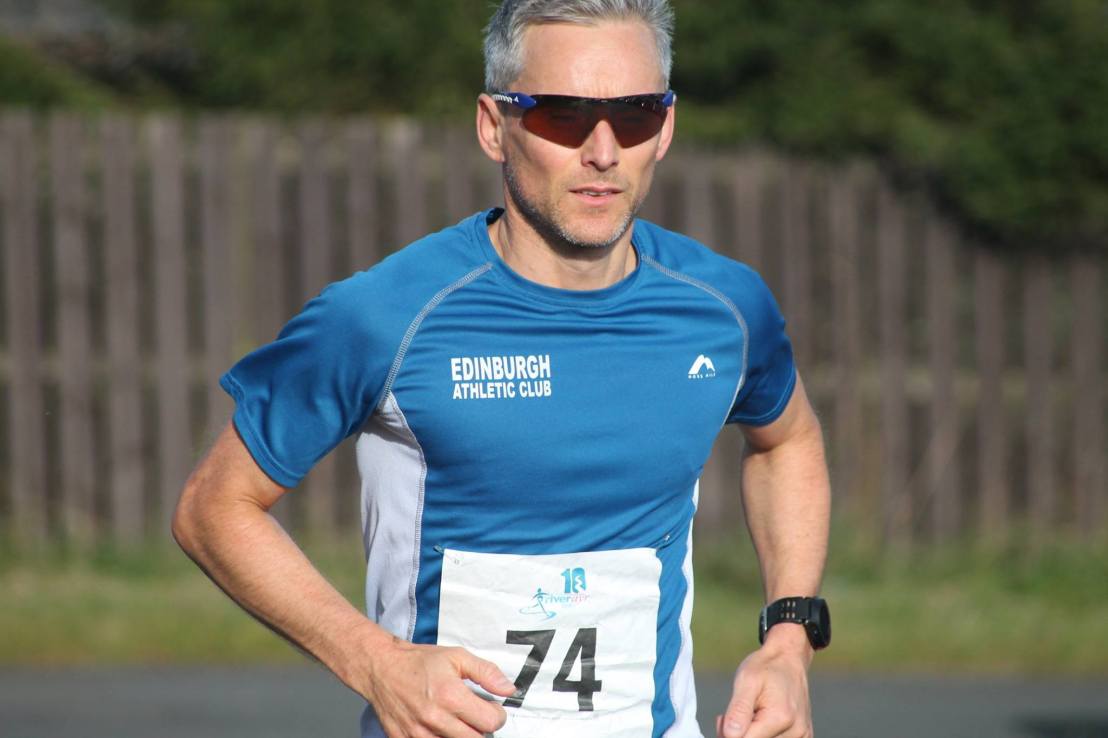 The race starts after a short brief from the race director and Rob Souter, a relay runner, 2 other lads and myself set the early pace.  Running at 6:30-6:50 pace this early on was, on hindsight, not a good idea.  The relay runner pulls away after about 2 miles and I pull off the little group about 5 miles into the race eventually catching the relay runner about 9 or 10 miles in.  I go through 20 miles in a little under 2:20 with second place not that far behind me.  On exiting Failford, around 25 miles, I miss a set of stairs and continue straight on, only realising when the trail comes to an end that I had gone the wrong way.  So I turn around and head back to the steps only to see David coming around the corner and heading up the steps.  I think this should be good to have some company for a bit and I start to climb the stairs. TWANG, sudden sharp and excruciating pain on the inside right thigh.  I couldn’t actually lift my leg to the next step.  To be fair to David he asked if I was ok.  I said it was cramp and would need stretched out, but this wasn’t cramp.  This felt like a muscle tear, it took all my energy not to scream out.  I hobble to the top of the steps and try to walk on flat ground, but it wasn’t for shifting.  I wonder how far the next checkpoint is and how I will get back to Ayr, but then, suddenly it disappears.  No reason, no stretching, nothing, it goes as quick as it appeared and I am able to start jogging.  The last mile was over 10 minutes so I know I’ve lost a bit of time on David.  As I leave the river bank to run across a field towards a short tarmac section I can see David at the top of the hill, I work out he is about 3 minutes ahead of me and so I see what I can do to catch him up.  A little time after that, I make another wrong turn and after some deliberation find the correct path and another 10 minute mile I decide that the win was probably not on the cards.  David knew the course having run it previously, and it was one of the reasons I wanted to keep him in sight.  However, even a minute is not enough to keep someone in sight on this course, it is so up and down, thick undergrowth and lots of sharp right and left hand turns.  Then another mistake at Stair, ironically, I miss a set of Stairs and end up crawling over some landslide, nearly falling into the river then thinking this can’t be right and head back the way.  I can’t find another way, so go back over the landslide and nearly falling into the river again and another 10 minute mile gets clocked.  Any attempt at a win has just faded and I settle in for the run home.

I pick up my drop back at the last CP and headed for the finish.  I knew I would finish, the pain of the Sartorius muscle a distant memory, just the pain of ultra running to contend with now.  There was a small water stop with about 4-5 miles to go and I should have asked how far ahead the leader was there, because a) David was struggling (unbeknown to me of course) and b) I felt really good.  I didn’t ask, but I did increase the pace down to 7 minute miles or under when the terrain allowed it.  A strong finish was as good as any and as I reached Ayr, I felt like I could keep on running.  The last mile of the race is along the river bank in a park and to get into the stadium you have to run, on a path, down the length of the back straight of the running track, on the outside of the stadium.  You can see into the track through the fence and there, on the final 100m of the track, was David hobbling across the finish line.  I crossed the finish line less than 2 minutes behind him having made back probably about 5-6 minutes in the last 4-5 miles or so!!!  Don’t get me wrong, David ran a great race, and suffered a bit on the last few miles with cramp, but had I known I was so close I am sure I could have closed that gap down a little more.  Would I have won?  I doubt it, 2 minutes is a lot of time to make up in 4-5 miles after running 35 miles.  However, it would have been fun to try.

I settled in this race, eased back knowing that the win wasn’t on and while it wasn’t really a target race, a win is a win.  I learn something about myself on every single ultra I have ran, be that something positive or negative.  In this case I settled for second place, but that won’t happen again.  I won’t settle for anything, I will keep pushing as hard as my body will allow me to.  You just don’t know what is going on ahead of you.

The River Ayr Race is a fabulous little ultra, brilliant organisation (although a few more signs would have been prefect) and a fantastic route.  It has all the hallmarks of a cracking Scottish ultra and I would recommend it to anyone.  The route takes you through some lovely little towns, including Sorn.  Sorn brings back memories of me as a 15 year old, running the 4 mile Sorn Chase.  I’ll need to look back the Lanark Gazette cut outs my Mum kept, but I think I ran (and won the under 16s) in a little under 22 minutes. Makes me quite chuffed that nearly 30 years later (and a very long running sabbatical) that I am a little quicker than that now.  It would be quite something to be able to say the same in another 30 years time…..Check back here on 1st October, 2046 🙂